Remember Roy Rogers? No? Then ask grandpa about Saturday morning pictures and the fastest draw in the West, the man with the white hat and a horse named Trigger. 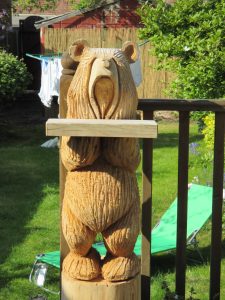 I recall all this because I’ve been practising my Roy Rogers draw in the Wild West of the Canadian Rocky Mountains. Only instead of a six shooter my weapon is a pepper spray. And the quarry? Not a black hat but a black bear. Well, it would be if old Bruno would just oblige by showing up at High Noon.

To be honest, I’m rather relieved he hasn’t. There’s been enough drama on this holiday already and I’ve seen his footprint on the grass path and a big parcel he left in the snow and that’s close enough for me.

Finally, after all this trekking and looking and hand on my holster I actually see a bear. Not in the wilderness but at the side of the road. He’s caused a traffic jam on the highway (in Canada, that’s a rarity), pursued by a dozen motorists on foot armed with cameras and he’s munching blithely away at some berries oblivious of the chaos he’s caused on the road. He turned his back on us all and I get a great shot (photo) of a big black backside. 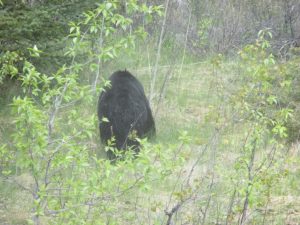 At the airport I’m mighty miffed to have to surrender my pepper spray. No flying back to Heathrow with my new bear gun, they say. No doubt they’re sharpening up their draw behind Calgary’s Baggage Reclaim at this moment.

So next week I’m off to London Zoo to get the front end of the picture – at a safe distance and minus Roy Rogers and his shooter.