A VOLUNTEER PLEASE: TO BE BURIED ALIVE

Would you willingly volunteer to be buried alive?

I know a crazy man who did just that – and all in the name of fictional authenticity. He wanted to know what it felt like to go beneath the ground locked in a coffin – so he could write a true-to-life story.

If it went all wrong, it would have been a true-to-death story and we’d never have known the answer.

The man in question was best-selling crime writer Peter James and this news came out during a talk at the London Book Fair. He’s dedicated to his researches so his stories have that authoritative feel and he had himself dumped in a coffin and the lid closed as part of his crime story plotting. Whoooah! 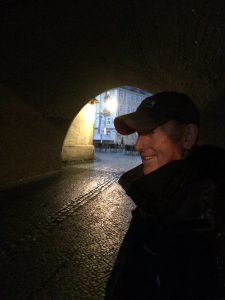 Then he wrote about the claustrophobia and the fear that you might never get out. Fortunately for him, he had help…. but not for me.

For a little bit of easy research he goes on patrol with the cops and attends post mortems. Not for me…

Then there’s snake bites and scorpions and the problems of antidotes and what happens to you in later life. (I’m not going to tell you that last detail.)

And then there was the man who was crazy about tigers.

Personally, for my researches, I go in for the easy stuff. A grand tour to establish the relevant details of all the public houses in Bury St Edmunds – not too desperately vigorous an assignment; a walking tour of Munich and an examination of the outerwall of Wormwood Scrubs. Mind you, someone was mad enough to let me fly their plane – take-offs and landings excepted, thank goodness!

As for coffins, snakes and tigers, you can count me out.