Murder, mayhem, bodies in the river… Slipper of the Yard, lookout! A desperate bunch of ne’er do wells are planning a crime spree to boggle the imagination. Actually, that’s what it’s all about. The imagination.

These masterminds of crime, devious cunning and unimaginable plotting are holding a secret Think Camp in deepest Devon. They’re experts at untold trickery, the seven deadly sins and precise description of all the particulars.

Add a briefing from MI6 and you have all the tricks of the covert trade, including a man with 15 different aliases.

And just in case the pace of criminality should for a moment drop, or there’s an unaccountable pause in the proceedings, the general advice is: have a man walk into the room with a gun. 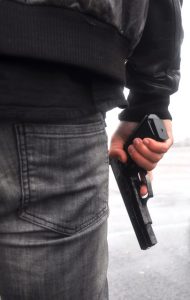 Of course, you’ve probably guessed it. The arch conspirators are not criminals at all – well, not according to them! – but putative writers of crime going by the name of the Arvon course on creative crime and thriller writing. Cue in the two main suspects giving out all the tips – Tobias Jones (The Salati Case and White Death) and Adam Lebor (The Geneva Option and The Budapest Protocol) – and there you have it.

Personally, I’ve just crept home in the dead of night, letting myself in by prizing up the latch on the bathroom window. I’ve got the key to the front door, of course, but why be so confoundedly boring?