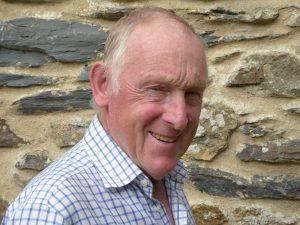 I’ve been a national newspaper journalist for many years but have always nursed the ambition to write novels about my favourite historical period – before, during and after the two world wars. And now with Exit Day I’m right up to date.

Everyone has to start somewhere – and my first “journalistic” job was operating an old-fashioned plug-in telephone switchboard for a City of London financial weekly. When I’d cut off too many calls and they’d sent me on my way, I managed to secure reporting stints around the London suburbs of Wembley, Southall, Hayes and Harrow. I followed this by switching to sub-editing at an evening paper in Shropshire and then joining the Daily Express in Manchester and London.

I guess it really all began as a young teenager when I published my own magazine called Opinion, printed illicitly by a cousin on her firm’s Gestetner duplicator. It sold to school chums and I remember getting told off for writing critical pieces on the Korean War, not quite the done thing at the time.

To help put my children through fee-paying schools I did a part-time bulk trucking job for a local bakery, much to the amusement of my colleagues. The bumps and mishaps along the way were many. Like the 8,000 apple tarts which hit the road – literally.

All worth the effort! I’m now the proud father of a judge and a headmaster.

My leisure pursuits have included driving for a village bus group in Suffolk, crewing and driving a steam locomotive hauling The Blues Express in Poland, rambling in Canada, the UK and Majorca (don’t try the last one, far too hot!), some gliding and a scary lesson at the controls of a helicopter – a birthday present from my son.

Plus a life-long interest in modern history, the Second World War in particular, and why we had to fight it. Hence the novel MUNICH, a key step on the run-up to that catastrophic conflict.