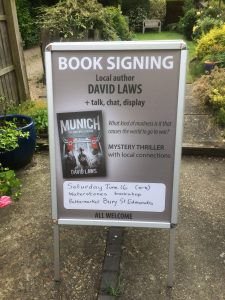 Where do authors get their ideas? It’s a question often asked and the answers, of course, are infinite: filching the news, mining childhood fantasies, rewriting the classics and so on. One answer, however, should be book signings.

I recently attended a library talk and signing where an author actually handed out questionnaires to his audience asking them for their stories. A bit upfront, I thought, although there were plenty of responses.

My own source is more prosaic. Selling and signing in Waterstones and WHSmith has garnered a whole range of intriguing first-person yarns from customers as well as stacking up the sales tally.

Like the man who bought my book and then told me his father’s story, which might be entitled The Man Who Wouldn’t Stand For Hitler. When the Fuhrer entered a restaurant in Berlin just before the war the British holidaymaker muttered “the man’s bad news” and refused to get to his feet, despite the fact that all the Germans were excitedly standing and shouting Heil. Next day the recalcitrant Brit thought it politic to make a quiet exit from Germany.

But this wasn’t the end of it. The man’s German fiancée called off their engagement and married someone else. After the war the two families met up again and my informant ended his tale with the words: “That’s when I met the woman who was so very nearly my mother.”

This story was just one of the many useful by-products of going into bookshops and organising signings of my first novel. There were lots more really surprising anecdotes, all grist to the authorial mill. So my approach to signings is this: prepare carefully, then make it a day of fun. It’s not just a sales exercise, it’s a learning experience. 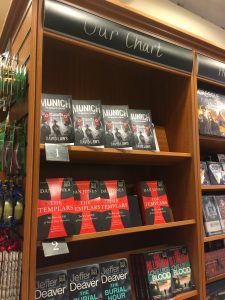 A little tip for other authors:great care should be taken with the accuracy of prior announcements, whether on chalkboards or email or print. No little spelling slips please! Which brings me to my private fear, that one day I may unwittingly juxtapose two tiny characters and advertise a “book singing”.

Now that would be different.

PS.  Thanks to all those who chatted to me during my sessions at Norwich, Southwold, Sudbury, Ipswich, Colchester, Lavenham and Bury St Edmunds.