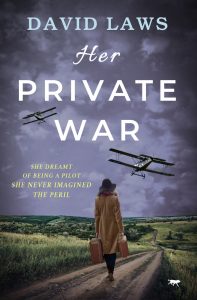 THE STORY: Suffragette Charlotte Dovedale’s life is a titanic struggle against authority. She has two passions: to fly – and fight for women’s rights.

Her efforts to become a pioneer pilot are thwarted in Britain’s class-conscious society and brought to a halt when women are banned from the air at the outbreak of the First World War.

When she finally wins her big chance at an operational aerodrome in France it’s a flight fraught with danger. She becomes stranded behind enemy lines, treks huge distances in an attempt to escape…but an electrified death strip stands in her way.